Scores of books, blogs, and articles have challenged the deficit theory, which was defined by Collins in 1988 as a belief that the poor are poor because of their own moral and intellectual deficiencies. Of course, that hasn’t stopped a far greater number of people from continuing to believe in the myth of the undeserving…

Kendra LaRoche is a Rowland Fellow of the 2011 cohort, and currently teaches at Burr and Burton Academy in Manchester, VT.
Most educators have good intentions. Many educators also reflect on their own practices. Some educators even go so far as to recognize their own biases. Even these top educators, who are already going above and beyond many of their peers to thoughtfully reflect, are left to flounder when it comes to how to combat their own stereotypes. While many have challenged the myths of a ‘poverty mindset’, few have offered solutions. Teachers and administrators feel powerless to address access to education, since it often falls outside of the scope of traditional schools.

In the 1960’s Cultural Deficit Theorists such as Hess, Shipman, Engelmann, Bereiter and Deutsch, began to gain more credence over the Genetic Theorists. Their studies, especially, began to focus on the idea of “nurture” versus “nature” (Erickson, 1987).” Most cultural deficit studies blamed the child’s social, cultural or economic environment as being “depraved and deprived” of the elements necessary to “achieve the behavior rules (role requirements)” needed to academically succeed (Hess & Shipman, 1965). Engelmann and Bereiter, further emphasized how “cultural deprivation” theories supported the idea that social and emotional deficiencies affected student performance within the academic system. Until dealt with, these differences, would make it “impossible for” culturally deprived students “to progress in academic areas” (1966). Although these same studies did testify that they could modify the behavior of disadvantaged children, they made little progress towards student knowledge acquisition. As the study states, there were “virtually no inroads against the children’s lacks in verbal learning” (1966:41). TOP
C ontexts for Understanding: Educational Learning Theories

According to Otto, numerous researchers have studied language differences between economically privileged children and children who live in poverty. These researchers have described differences in terms of dialect, ways in which children use language to describe aspects of their lives and communicative patterns in the families of these children. The researchers noted that children from economically deprived communities did not succeed in school as well as the children from middle- and upper-class environments.
The “deficit theory” of education posits that students who differ from the norm in a significant way should be considered deficient, and that the educational process must correct these deficiencies.

Put like that, it’s obvious: many studies have shown that children from deprived backgrounds have a more limited vocabulary than others — sometimes extremely so. In advanced countries, where there is a large ‘underclass’ of unemployable people, children often lack role models of responsible adults.
The Deficit Theory attempts to explain why certain disadvantaged students show a high failure rate in school. These students coming from socio-economically disadvantaged homes, show a lack of verbal stimulation and entered school without the necessary linguistic resources for success. 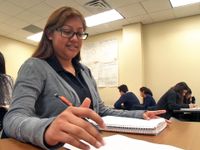 Their voice and participation in the planning for success have a huge impact on their motivation to participate.
The GIT and the instructional roundtables that follow are the most important ownership interventions. Each student, as well as his or her parents, is integral to the roundtable where solutions are decided with the student’s input. They have to own the solution: