This handbook illustrates how education scholars employ Critical Race Theory (CRT) as a framework to bring attention to issues of race and racism in education. It is the first authoritative reference work to provide a truly comprehensive description and analysis of the topic, from the defining conceptual principles of CRT in the Law that gave shape to its radical underpinnings to the political and social implications of the field today. It is divided into three sections, covering innovations in educational research, policy and practice in both schools and in higher education, and the increasing interdisciplinary nature of critical race research. With 28 newly commissioned pieces written by the most renowned scholars in the field, this handbook provides the definitive statement on the state of critical race theory in education and on its possibilities for the future.

During the days after the O.J. Simpson trial verdict, when the former football star, sports commentator, and actor was acquitted of murdering his ex-wife and her male friend, tensions were high in many communities. The talk show hosts on both television and radio were discussing O.J. non-stop. The day the verdict was announced I was teaching a class of pre-service teachers. Our room did not have a television monitor so I took a portable radio to class, plugged in my earphone, and when the verdict was announced repeated it verbatim to the class. No sooner had I shared the verdict than a young White student sitting in the front row of the class began to cry. What about this murder—given the thousands of murders that occur in the US every year—made it personal to my student?
In another chronicle Bell (1989) describes what he calls “The Black crime cure,” where a group of young Black men discover a magic pill that changes them from petty street criminals to outstanding citizens. They no longer do drugs, rob and steal, cut school, or participate in gang activity. They become model citizens as long as they keep taking the pills. Unfortunately law enforcement has less work to do—the gang task force is no longer needed, the drug enforcement task force has no purpose, and the nightly patrols in Black communities yield no suspects. At first, the larger community is delighted, but soon people begin to realize how lucrative crime is for the rest of the society. Now they must lay off police officers and prison guards. The security firms sell fewer security devices and need to cut back their work forces. The alternative schools and juvenile detention centers are without youth. The town’s entire economy was based on the by-products of crime. To return things to their previous state, the police follow the Black youth to a cave outside of town and discover the source of the magic pills. After the youth leave, the police raid the cave, confiscate all the remaining pills, and blow up the site. 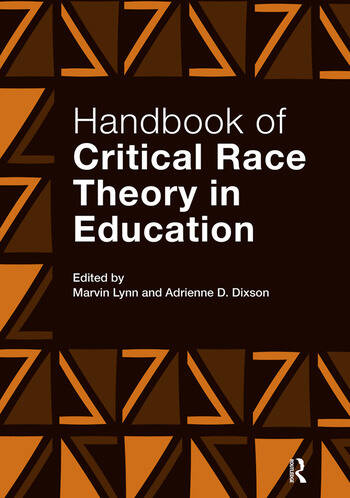 Routledge & CRC Press eBooks are available through VitalSource. The free VitalSource Bookshelf® application allows you to access to your eBooks whenever and wherever you choose.
12 The Racialization of South Asian Americans in a Post-911 Era
Binaya Subedi

We would like to acknowledge and thank Daniel Solorzano (UCLA) and Janelle Scott (UC-Berkeley) for providing space and support for these presentations.
Critical race theory (CRT) in education has been used to expose and analyze racism in K-12 schooling and higher education. However, the theory has been underutilized as an inventory lens applied to school leadership practice. Our paper takes on this inquiry by highlighting the work done by an administrative leadership team at a majority racially diverse middle school in the Mountain western region of the U.S. Through an examination of the practice of racism as whiteness as property through teacher expectations, classroom instruction and teacher-student and parent interactions and by implementing changes in areas of student discipline, and color-blind teacher perceptions, the leadership team developed racial equity pathways which served as an important implementation of CRT leadership.