Educational Viewpoint:
Rousseau�s theory of education emphasized the importance of expression to produce a well-balanced, freethinking child. He believed that if children are allowed to develop naturally without constraints imposed on them by society they will develop towards their fullest potential, both educationally and morally. This natural development should be child-centered and focused on the needs and experiences of the child at each stage of development.
Educational Impact:
Rousseau is known as the father of early childhood education. As a result of his educational viewpoint, early childhood education emerged as a child-centered entity rich in unlimited, sensory-driven, practical experiences. Active participation in drawing, measuring, speaking, and singing also emerged as a result of Rousseau�s educational viewpoint. Today, many elements of Rousseau�s educational principles remain as a dominant force in early childhood education. 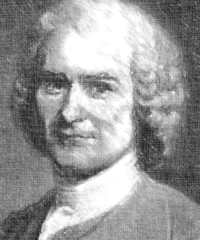 Students are provided with concrete materials, objects and situations for learning to take place B18:37
Knowledge constitutes the ability to reason and use our senses to learn; if we use books in place of nature and our senses it teaches us to believe much and know little F1 189 As to my pupil [Emile], permit me to prevent him studying any of [these things] till you have convinced me that it good is for him to learn things three-fourths of which are unintelligible to him … When I get rid of children’s lessons, I get rid of the chief cause of their sorrows, namely their books. Reading is the curse of childhood, yet it is almost the only occupation you can find for children. Emile at twelve years old, will hardly know what a book is … When reading is of use to him, I admit he must learn to read, but till then he will only find it a nuisance …
Work or play are all one to [Emile], his games are his work; he knows no difference. He brings to everything the cheerfulness of interest, the charm of freedom, and he shows the bent of his own mind and the extent of his knowledge. Is there anything better worth seeing, anything more touching or more delightful, than a pretty child, with merry, cheerful glance, easy contented manner, open smiling countenance, playing at the most important things, or working at the slightest amusement? …